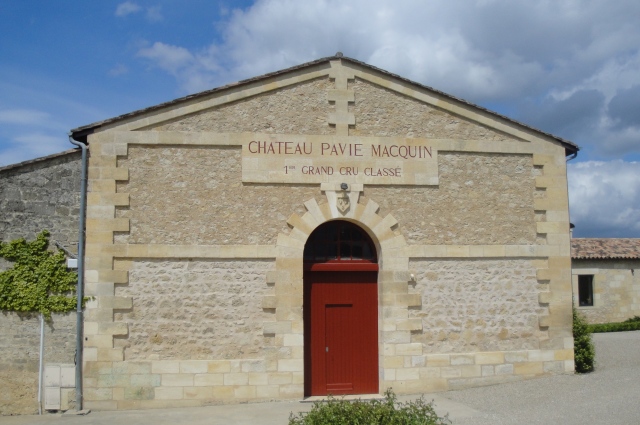 It’s been a while without any posts on Bordeaux, so I thought I should pull out some more notes from this year’s Bordeaux before 2013 has completely come to an end. During Le Week-end des Grands Crus in May I (together with K. and A.) visited three producers during the … day that is part of the weekend. All were on the right bank, where Merlot rules with Cabernet Franc in a supporting, but very important role. I previously wrote about the visit at Château Le Bon Pasteur in Pomerol. We also visited two producers in Saint-Émilion, and the better of the two visits was at Château Pavie Macquin (it also has a Wikipedia article). In the most recent classification of Saint-Émilion wines, Pavie Macquin was elevated to the second-highest level, Premier Grand Cru Classé B. More about this classification at the end of this post, after the tasting notes.

The Macquin part of Pavie Macquin’s name comes from monsieur Albert Macquin (1852-1911) who was a local Saint-Émilion pioneer in grafting European vines on American rootstocks to avoid Phylloxera attacks on the vines. The Pavie part is the name of a plateau where Pavie Macquin is located, eastsoutheast of Saint-Émilion itself, at a distance of some 300 meters from the city wall. The “general” plateau around Saint-Émilion (and not just the small part called Pavie) is the location of most top properties of the appellation, since that’s where we find chalky soils, in some locations mixed with some clay. These soils are benficial for the cultivation of those Merlot/Cabernert Franc blends that are characteristic for the appellation. Simpler Saint-Émilion wines are grown on gravel mixed with either silt and clay or with sand, and those soils are found in the direction of the city of Libourne and the river Dordogne.

Pavie Macquin’s neighbours to the south, on the same plateau, are Château Pavie and Château Pavie-Decesse. These two properties have the same owner. To the west, we find Troplong Mondot and to the north Trottevieille. All three Pavie properties are classified, Pavie at the highest and Pavie-Decesse at the third highest level. 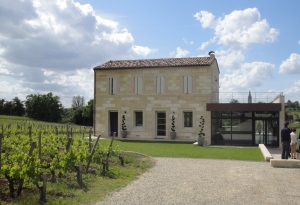 Older building to which a tasting room has been added, only the entrance visible from this side. It had large windows and a very impressive view.

Pavie Macquin consists of 15 hectares (37 acres) of which 80% Merlot, 18% Cabernet Franc, and 2% Cabernet Sauvignon. Since 1994, the property is managed by Nicolas Thienpont and in 1990, Stéphane Derenoncourt was hired a winemaker (only later did he start to consult widely). Pavie Macquin is a property that apparently didn’t have a big name in times past, but which has improved progressively from the 1990s. The elevation in the 2006 edition of the classification was something of a confirmation that they have reached the level that could be expected from their location. Thienpont owns a number of other somewhat simpler proporties in the area, but isn’t the owner of Pavie Macquin. The owners are some grandchildren and great-grandchildren of Albert Macquin, but they do not take part in the day-to-day running of the property. From the outside, this arrangement isn’t really noticeable, and Pavie Macquin is run as if it was a part of the Thienpont group. At our visit, it was “team Thienpont” that received us for a guided tour, headed by Cyrille Thienpont (son of Nicolas Thienpont). The also took the opportunity to present a number of other Thienpont wines. Since all the reds were of the 2009 vintage, we could get a good comparison between the different Thienpont properties. A very nice initiative!

If I summarise my impression of the red wines, they are all well made but in a noticeably “modern” style. The aromas are mostly as can be expected for wines dominated by Merlot, and the Cabernet Franc doesn’t “speak” as loudly as in some other Saint-Émilions. Several of the wines were definitely approachable already, earlier than the Bordeaux average, and this must be a deliberate choice in vinification. Of course, the 2009 vintage character with a lot of concentration of fruit and more ripe and sweet fruit than usual contributes to the style of the wine. The serving order was well chosen, and contributed to progressively more tannins and higher scores.

The red wines of the tasting. The tasting order was from right to left.

A wine in an easy-to-drink and modern style, in a way well made and ambitious, but a bit too much obvious alcohol for my taste.

This wine is also easily accessible and produced in a rather easy-to-drink Merlot style, but is more polished than Puygueraud.

Serious and modern, rather elegant style. Although the wine is approachable now, it is a bit less accessible than La Prade and a bit more suited for cellaring.

More concentrated at present than the Berliquet but a bit more red berry notes, shows more tannin and produced in a style more adapted to (or even demanding of) cellaring.

Nose with red and dark berries, slightly sweetish impression, some mineral and mint, spice and well integrated oak, slightly flowery; elegant. Palate with red berries and some dark berries, some cranberries, quite concentrated, some sweetness of fruit, spice, rather well integrated medium+ tannins of somewhat polished style, and a long aftertaste. Young, but somewhat approachable, 91+ p.

Slightly darker berry notes than Larcis Ducasse, and handles the ripeness of the vintage better, which means that it comes across as more balanced.

2000 Château Pavie Macquin
Saint-Émilion Grand Cru Classé (2000 was before their elevation), in the vineyard 80% Merlot, 18% Cabernet Franc, and 2% Cabernet Sauvignon.

Well, in this case I didn’t note a score, but there are those who think that such a thing isn’t needed anyway, so this is an opportunity to see if the tasting note makes sense anyway. I would guess that the number I didn’t write down would be something like 91-92.

Somewhat light in style, not as pronounced oak or spice note as expected; fresh. 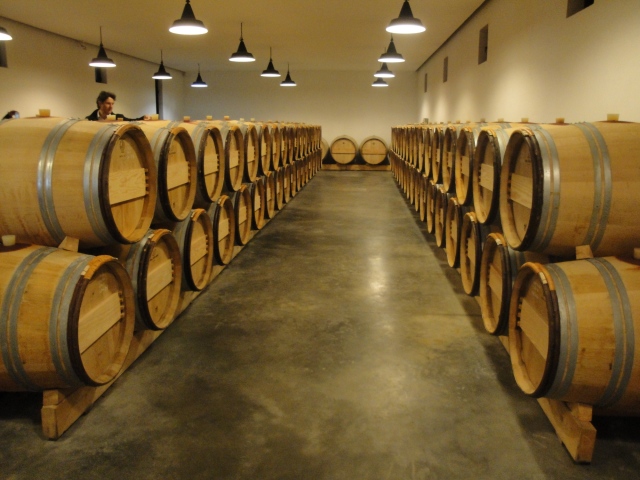 Perhaps not really a small barrel cellar (it was situated above ground, but I prefer calling it a cellar anyway), but compared to the large properties on the left bank, the smaller scale of the well known right bank châteaux is obvious.

Some words on the Saint-Émilion classification

The Saint-Émilion classification, the first version of which was published in 1955, is the only of the three to be regularly updated, approximately once every ten years. The latest version is from 2012, and the reason that it appeared less than ten years from 2006 was the legal circus of appeals, injunctions and repeals of injunctions (or something of that kind) that took place. The final result was that the classification had to be redone. Those with a special interest can read the Wikipedia article for an overview of the weird events.

At the time of reclassification, the properties have to send in the last 10 vintages for evaluation, and 15 vintages if they want to be considered for the highest levels. This means that those who do a makeover from a modest starting level will have to wait a while before they will be elevated to a higher level.

This entry was posted in 2009, Bordeaux, Merlot, Sémillon, Wine classification. Bookmark the permalink.