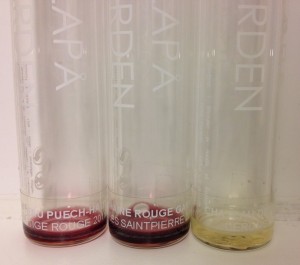 I recently tested samples of three French wines shipped in 60 ml glass tubes WIT, where they are stored under inert gas. Last time I tried similar samples I explained the concept in more detail, and had some comments on how to taste wines from such tubes. In short: give them some time and some air, by generous swirling.

The reason I try some wines this way is that a French-Swedish wine dealer (“Handla på vingården”) offers samples of wines this way. Each month they introduce a new set of three wines in WIT tubes, usually three wines from one and the same producer, with the small cost of the set deducted if you then actually order. This time around I tasted three wines that actually came from three different sets, and was offered as a free sample.

Nose with blackberries, cherries, a hint of sweet berry notes, some liquorice, some animal notes, rather flowery with violets. A bit more than medium bodied, with cherries, noticeable acidity and fresh tartness from attack to aftertaste, liquorice, medium tannins and a bit of alcoholic fire throughout. Comes across as rather young at present, 87(+) p.

This wine shows rather much Syrah character in the pleasant nose, but the “Languedoc warmth” and the Grenache component can be noted in the somewhat fiery character, so the wine is not at all similar to a typical Syrah from Rhône. In a way this is a paradoxical wine with both alcoholic fire (“hot”) and very pronounced acidity (“cool”). Although it is by no mean extreme in this case, a too prominent alcoholic feeling always means a reduced score from me, as some who have read many tasting notes may have noted. The explanation for the small plus sign is that I actually believe that this wine, thanks to its fresh acidity, may become a bit more balanced if more spice notes develop with, say, 1-3 years of cellaring. Those who don’t mind a bit of extra alcoholic feeling can drink it straight way.

Nose with really dark berry notes with blackberries, noticeable tar and smoke notes, some mineral with a crushed stone character, a hint of green notes and a light flowery note with violets. Medium bodied(+), blackberries and other dark berries, tar and spice, good acidity, very light fiery character with sweetness of fruit, noticeable and rather powerful tannins “with claws” that stay on long in the aftertaste, where some sweet berry character also provides some freshness. Young; those who enjoy tannic wines drink now while others put it away for cellaring, 89+ p.

Dark and muscular nose, unusually dark Syrah character for a southern Rhône wine. The tough character is present all the way to the aftertaste, and all things considered, this wine is probably more Mourvèdre-style (with the exception of “a lack of horse” in the nose). This must be the result of the old Syrah wines rather than the 10% of Mourvèdre as such. I’d guess this could definitely take 10-15 years in a good cellar.

Cérons is one of those appellations in the neighbourhood of Sauternes that produces sweet wines of the same style as Sauternes itself. 2007 is a top vintage in Sauternes. If I had tasted blind, I could not have told that this wine wasn’t a Sauternes. It is at more-or-less the same level of sweetness as those wines (my guess here is a residual sugar of about 100 g/l), and it raises distinctly above the level of the “simpler wannabe-Sauternes-copies” from e.g. Graves Supèrieures.

Unfortunately, sweet wines seems to be very difficult to sell today, irrespective of quality. When you know that the sweet wines usually are the most expensive to produce and that the yield (quantity of wine produced per hectare or acre) is lower than for other types of wine, you can’t help feeling sorry for the sweet wine producers. Sometimes I wonder if I’m alone in liking them, although the good ones are so very good? Have decent people completely stopped eating such things as foie gras, blue cheese, canelés and other delicacies that pair exceptionally well with Sauternes-styled? Well, then start again, and don’t forget the matching wine!!!