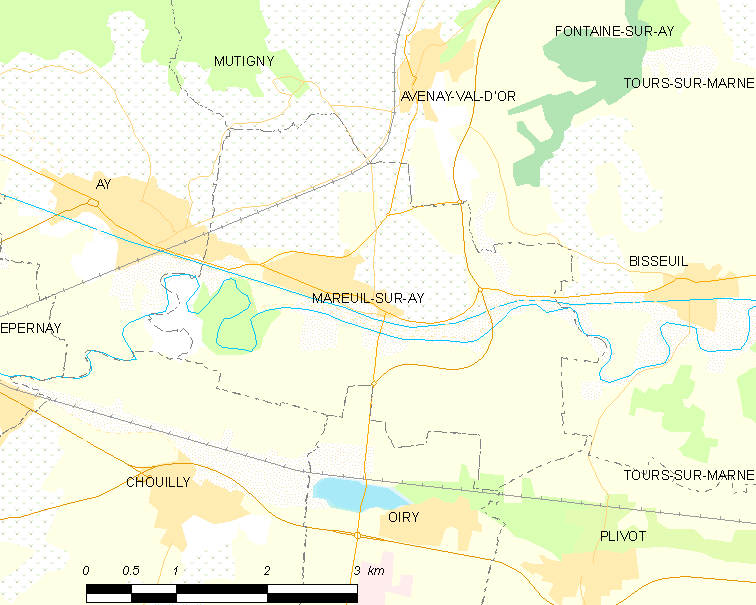 The map is linked from Wikimedia Commons, and the geographical information originates from OpenStreetMap. The dotted white area corresponds to the vineyards, and light yellow indicates other open terrain. 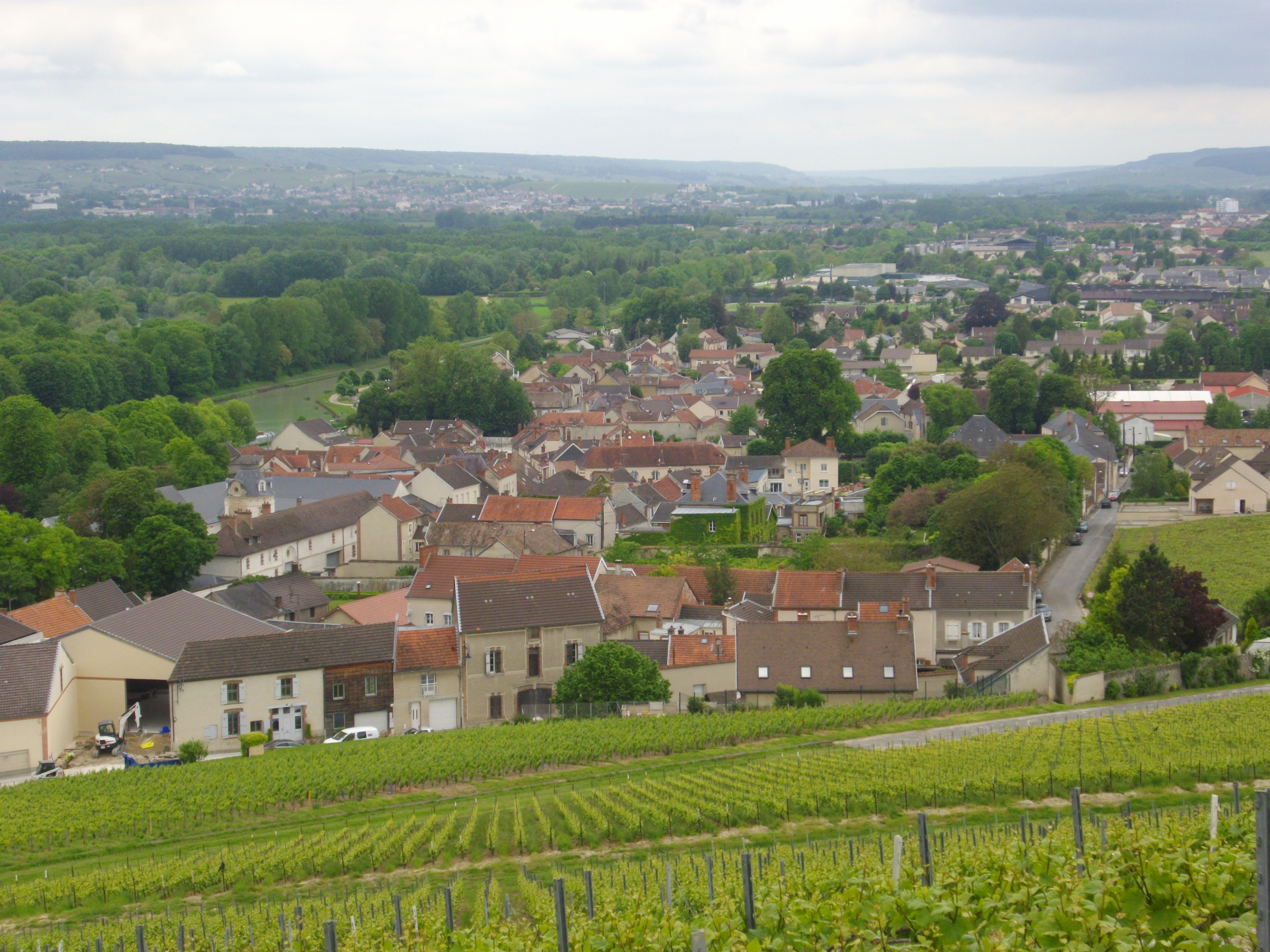 Mareuil-sur-Aÿ as seen from the Notre Dame Du Gruguet statue, which is located on a hill in the vineyards to the northeast of the village. Picture linked from Wikimedia Commons (photo Fab5669, 2016).

The town hall (mairie) in Mareuil-sur-Aÿ. The picture is linked from Wikimedia Commons (photo by G.Garitan, 2012).

As the name indicates, Mareuil-sur-Aÿ is a neighbour of Aÿ (four times as many inhabitants), and the built-up area in Mareuil is continuous with that of Aÿ across the commune border.

The village Mareuil-sur-Aÿ is located directly at the Marne river, or rather at the straight and navigable Marne canal (canal latéral à la Marne), with the more undulating Marne river just beyond the canal. Behind the village, to the north, the southern part of the Montagne de Reims rises. Before the days of railroad, river transport on Marne played an important role in transporting the wines of Champagne in the direction of Paris.

The former commune of Mareuil-sur-Aÿ covers 1148 ha and counts 1218 inhabitants (as of 2013), known as Marotiers and Marotières respectively.

Since 1 January 2016, Mareuil-sur-Aÿ is a so-called commune déléguée within the merged commune Aÿ-Champagne, which is of the type commune nouvelle. This is a rather new type of merged commune which means that some functions are kept within the communes déléguées, rather than the former communes completely disappearing in the merged commune. The new commune was formed by Aÿ, Mareuil-sur-Aÿ, and Bisseuil, and it resulted in 3194 hectares and 5765 inhabitants (as of 2015 in the former communes). The town hall of the new commune is located in Aÿ.

Lock in the Marne canal just east of Mareuil-sur-Aÿ. Clos des Goisses is visible in the background. The picture is linked from Wikimedia Commons (photo H.P.Burger, 2008).

The vineyards in Mareuil-sur-Aÿ are dominated by south-facing slopes, consisting mostly of Pinot Noir, which is the case with all of the Grande Vallée de la Marne – the eastern part of the Marne Valley. This village produces powerful wines, thanks to the south-facing vineyards.

Champagne houses that use vineyards in this village include Bollinger, Moët & Chandon, Roederer, Philipponnat, and Piper Heidsieck.

While there are 17 Champagne villages classified grand cru, which means that they were rated 100% on the échelle des crus scale (it has been phased out, but the villages can still keep their grand cru status), there were two villages rated 99%: Mareuil-sur-Aÿ and Tauxières-Mutry. All 44 villages being rated 90%-99% are classified premier cru, but all the other 42 are rated 90%-95%, and no villages are at 96%-98%. So Mareuil and Tauxières just missed out on being classified grand cru. Mareuil may therefore very well be the best premier cru village, and is also where one of Champagne’s most well-known vineyards, Clos des Goisses, is located.

The fact that the larger and grand cru-classified Aÿ receives more attention, although the Champagnes are rather similar, has led to a local expression: “Aÿ le nom, Mareuil le bon”.

Mareuil-sur-Aÿ as seen from approximately northnorthwest. The Marne canal can be found just beyond the village and Clos des Goisses is located just outside the picture to the left. The industrial zone in the distance is located in Oiry. Picture linked from Wikimedia Commons (photo G.Garitan, 2013).

Other vineyard sites in Mareuil-sur-Aÿ include Carrière d’Athis, Les Cintres, La Clef, Les Côtes, Croix Blanche, Les Dudies, Montin, and Valofroy, of which some are part of Clos des Goisses.

This list is not complete, but there is one historical producer that is worth mentioning in connection with Mareuil-sur-Aÿ:

Here are two videos from Youtube consisting mostly of old postcards of Mareuil-sur-Aÿ from the early 20th century.

This entry was posted in Champagne villages and tagged Mareuil-sur-Aÿ. Bookmark the permalink.