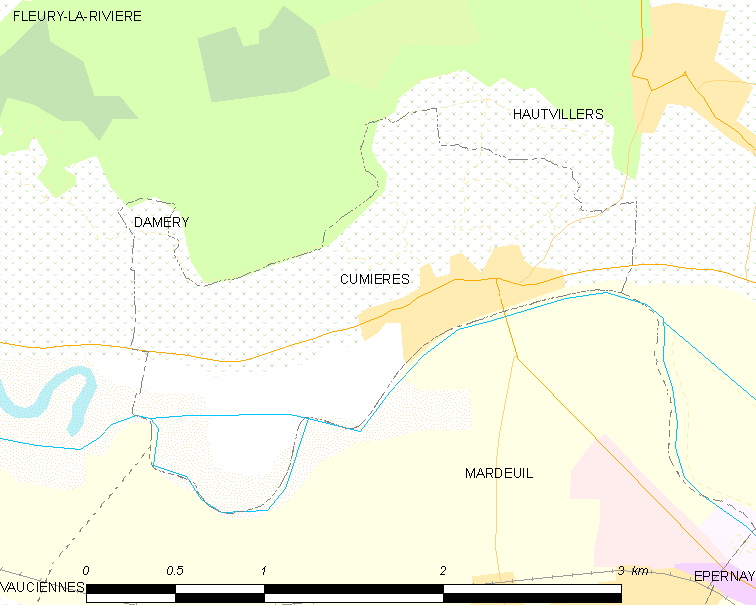 The map is linked from Wikimedia Commons, and the geographical information originates from OpenStreetMap. The dotted white area corresponds to the vineyards, light yellow indicates other open terrain, orange indicates built-up areas, and green indicates forest.

Cumières is located at the Marne river, and is the western outpost of the Grande Vallée de la Marne are, the wider eastern part of the Marne valley. One commune further to the west, in Damery, there is neither premier cru classification nor a “Grande” prefix, and we are simply on the right bank of the Vallée de la Marne.

Cumières is the home port of a boat that is used for sightseeing cruises on the Marne. (Just upstream of Cumières, i.e., to the east, the Marne and the Marne canal flows together.)

The vineyards in Cumières are predominantly south-facing slopes with Pinot Noir as the most common grape variety, but also with a fair proportion of Pinot Meunier and Chardonnay.

Champagne houses that use vineyards in this village include Moët & Chandon and Joseph Perrier.

Cumières is one of a handfull of villages with a strong tradition of producing good red wines, called Cumières Rouge, but their appellation (when sold on their own) is Coteaux Champenois, as for all red wines from Champagne. All of theses red wine villages are located in south-facing slopes in the Grand Vallée de la Marne and the southern part of the Grande Montagne de Reims. A surprisingly large number of growers in Côte des Blancs get the red wine to their rosé cuvées from Cumières, so the village seems to have Pinot growers that unusually willing to exchange grapes/base wine.

An unusually large number of vineyard-designated Champagnes are/have been produced from vineyards in Cumières, currently (as of 2014) the largest number I’ve found in any village.

In the foreground vineyards in the borderland between Cumières (those in the middle and to the right) and Hautvillers (those to the left), with a sign (on the Hautvillers side) that says “Vignobles Joseph Perrier”. In the background, the Marne river can be seen. In the distance to the left Épernay is visible, and the built-up area a little closer to the right in the background is Mardeuil. The Picture is linked from Wikimedia Commons (photo Rob & Lisa Meehan 2007, originally uploaded to Flickr)

A panorama of Cumières and the vineyards above the village, photographed from the other side of the Marne river. Some of the vineyards located at the very top of the hill, closest to the edge of the forest, are actually located in the Hautvillers commune, as can also be seen from the map above. In the “left-right direction”, this strip of Hautvillers vineyards begins a little to the right of the small house that is mid-picture at 0:09, but it begins some distance higher up the slope than the location of the house.

This entry was posted in Champagne villages and tagged Cumières. Bookmark the permalink.