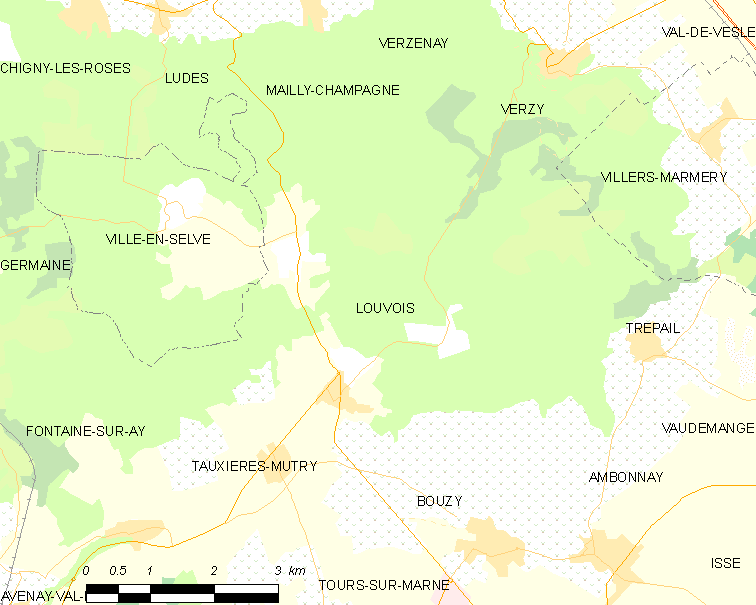 The former town hall (mairie) of Louvois. The pictures is linked from Wikimedia Commons (photo G.Garitan, 2013).

Louvois is located on the south side of the Montagne de Reims, where the landscape changes from vineyards and open land to forest above Tauxières-Mutry and Bouzy. The vineyards are located at the southern edge of the commune.

The Louvois commune covers 1217 hectares and counts 301 inhabitants (as of 2013), referred to as Louveteaux.

In Louvois, there is a palace by the name Château de Louvois, with a history going back to the 13th century although the present buildings were reconstructed in the 19th century. Since 1989, it is owned by Laurent-Perrier.

Since 1 January 2016, Louvois is a so-called commune déléguée within the merged commune Val-de-Livre, which is of the type commune nouvelle. This is a rather new type of merged commune which means that some functions are kept within the communes déléguées, rather than the former communes completely disappearing in the merged commune. The new commune was formed by Louvois and Tauxières-Mutry, and it resulted in 2234 hectares and 589 inhabitants (as of 2013 in the former communes). The town hall of the new commune is located in Tauxières-Mutry.

The vineyards, which are located exclusive in the southern outskirts of the commune, are continuous with those of Bouzy. The commune border goes straight through (or rather, follows a zig-zag pattern through) the vineyards northwest of Bouzy.

On the now-defunct  échelle des crus, Louvois was rated 100%, which has made it a grand cru village in similarity to its neighbour Bouzy, while the other neighbouring village Tauxières-Mutry was rated 99% and became a premier cru.

Champagne houses that control vineyards in the village include Bollinger, Piper Heidsieck, and Roederer.

A video collage composed of old postcards from the 20th century, featuring views of Louvois.

In the TV series Oz and James’s Big Wine Adventure (2006), Oz Clarke and James May made a visit to Pierre Boever in Louvois.

The whole episode on Champagne can be seen in two parts here and here.

This entry was posted in Champagne villages and tagged Louvois. Bookmark the permalink.