Champagne village profile: Verzy in the Grande Montagne de Reims, one of the grand cru villages of Champagne 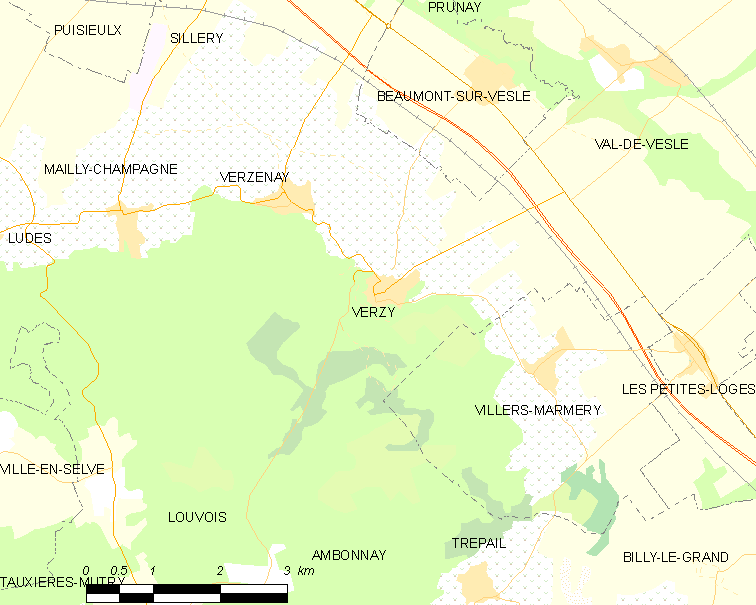 
Google Maps view with the villages in the Grande Montagne de Reims highlighted. The grand cru villages including Verzy are in green, the premier cru villages are in yellow, and the autre cru villages in orange. The light green box shows the Perle blanche area.

View from the vineyards below the village, to the left the church is visible, église de Verzy, and to the right the facilities of Louis de Sacys. Picture linked from Wikimedia Commons (photo Garitan, 2012).

Verzy is located mid-slope on the Montagne de Reims hill, on the north/northeastern side.

The Verzy commune covers an area of 1337 hectares and counts 1047 inhabitants (as of 2012) referred to as Verzyats and Verzyates.

In Verzy there is also a small forest of dwarf beeches growing in a crooked way, called Faux de Verzy.

Verzy was promoted from premier cru to grand cru status in 1985, at the same time as Chouilly, Oiry, Oger, and Mesnil-sur-Oger. At this time the number of grand cru villages increased from 12 to 17. This means that the neighbouring village Beaumont-sur-Vesle, today much less known than Verzy, was a grand cru village before Verzy was.

A presentation of Faux de Verzy with its dwarf beeches (French with no subtitles).

This entry was posted in Champagne villages and tagged Verzy. Bookmark the permalink.

1 Response to Champagne village profile: Verzy in the Grande Montagne de Reims, one of the grand cru villages of Champagne