Just over a week ago, Eriks vinbar, which unsurprisingly translates as Erik’s Wine Bar, finished their season. On the Stockholm wine map, this is one address that is just as pleasant as it is reliable. On this occasion, there were some extra treats available by the glass.

Golden colour. Mature and pleasant nose with slightly old yellow apples, classical bready notes, some gunpowder smoke and toasted notes including coffee, rather noticeable in its development. Dry palate with ripe fruit notes, apples of mixed colour, good acidity, noticeable minerality, some pepper and other spice notes. Rather ready in its development, but can take a lot more time in the cellar. 91 p.

Here a lot of things has happened to the development, despite the fact that this glass originated from a magnum. Now, it definitely comes across as a typical Jacquesson in style and quality. It is interesting to compare to my impressions in spring 2012, when this 2002 didn’t quite fit into the pattern from this producer. 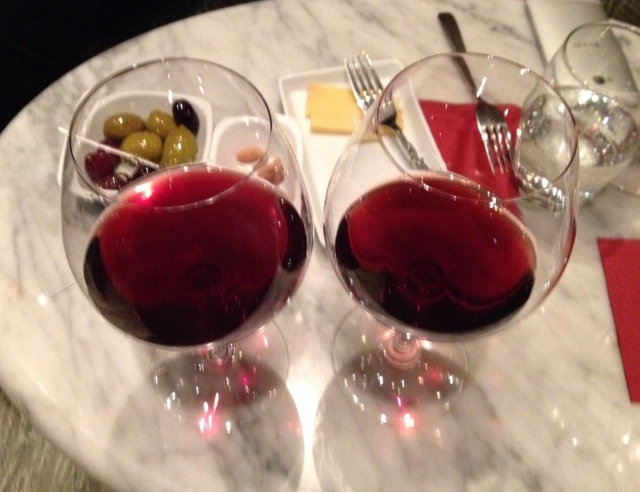 A fine old saying goes “life is never more beautiful than when seen through a glass of Chambertin” or something to that effect. In the absence of Chambertin, I found both Échézeaux (left) and Clos-Vougeot (right) to be fully adequate substitutes!

Somewhat paler colour at the edge. Nose with mature strawberries and some cherries with a slightly herbaceous note, spices with some oak barrel feeling. More flowery notes came into effect with time in the glass, but that took some time. Palate with ripe strawberries, some cherries, pronounced stony and chalky minerality and noticeable acidity, some spice tones and some tannin. Definitely a Clos de Vougeot on the elegant side of things. More or less fully developed, 91 p.

Nose with ripe strawberries, some cherries, a hint of liquorice and balsamico notes, noticeably flowery, a well integrated oak barrel note and marvelous elegance! The palate is just above medium-bodied with ripe strawberries, some cherries, pronounced chalky minerality, pronounced and fine acidity, and well embedded tannins. The wine shows great purity and elegance, but with tendency of being “closed” on the palate, so it is probably on its way to a less expressive phase, 94+ p. The wonderful nose would easily carry a higher score – say 96 or so – if the palate had been completely “open for business”.

This tasting note can be compared to my impressions of the 2010 DRCs the last year, when they were newly released. It is fascinating how elegant almost all red 2010 Burgundies are, and that the DRCs hide any green notes from whole bunches so well. There’s just pure Pinot elegance! But unsurprisingly the “tunnel”, the “dumb” or closed down phase, seems to be on its way. I’ll continue to taste red 2010 Burgundies from my own cellar now and then also when they are 5-8 years old, but mostly those at the regional and village level to see how they develop. I’m just too fond of mature Burgundies and of the 2010s to risk “firing off” the best wines at the wrong moment, when there’s too little of them in the cellar to start with.

Classical, powerful and rather young Bordeaux nose with blackcurrants that go in the direction of even darker berries, some barnyard aromas and tar, a hint of dried herbs, and well integrated oak. The palate is medium bodied+, with blackcurrants, good acidity, some tar and some pepper notes, tannins that are well integrated into the fruit, and a aftertaste dominated by dark berries with some tannins. Still on the young side, but somewhat accessible now, 94+ p.

Poyferré can definitely be called modern in its style, in particular compared to the two other Léovilles, but in the 2005 this is combined with a very fine balance on the palate and a high class all the way through. I do note that Neal Martin as given this wine a higher score (95) than Parker (93), which I usually take as a sign of balance and classical vibes.

Light amber-noted golden colour. The nose is big and shows some caramelized and dried notes, is somewhat nutty (I get an impression of chopped nuts), some fried apples with mild spices, and is somewhat aromatic with some of that “glue note” (very pleasant glue though!) that can often be found in mature Sauternes. The palate is sweet, with dried fruit, some madeirized notes, powerful concentration, good acidity, a quite prominent spiciness, and a really long and spicy aftertaste. Several glasses were poured at the same time, and initially there was a bit of an old cellar aroma (some started to fear a cork taint) that then blew away with some time. Considering these initial notes, this was perhaps not a perfect bottle, but it finished marvelously well. 95 p?

I also tasted the 1976 Yquem last year, that time from a bottle that showed a bit more oxidation notes.

Brown (mahogany) colour with a yellow edge, darker than these wines tend to be. Classical Madeira nose with burnt sugar, molasses, powerful spice notes and dried fruit. Sweet palate, again with classical mature Madeira notes with caramel and burnt sugar, good concentration, massive acidity and spices, and a long aftertaste. Mature now and is unlikely to get old while the corks last, 93 p.

This wine did perhaps not show quite the amount of citrus notes that many other older Madeiras do, but otherwise all the expected notes were in place.