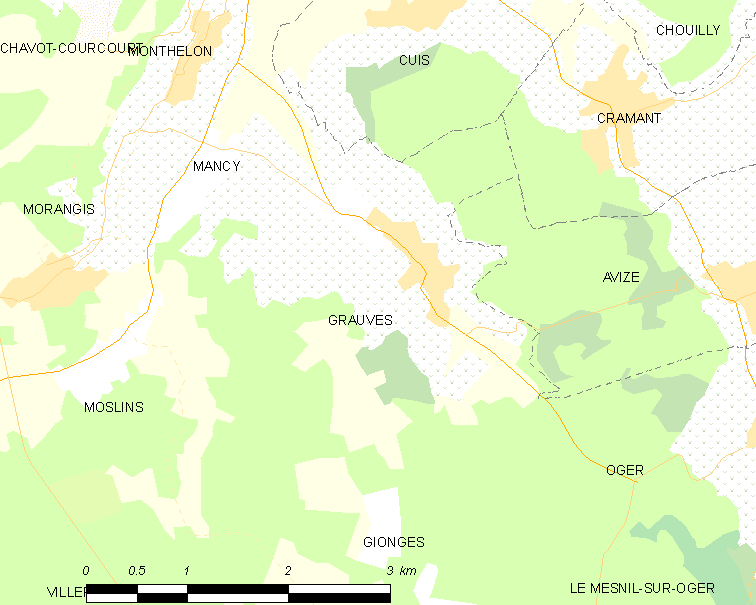 
Google Maps view with the villages in the Côte des Blancs highlighted. The grand cru villages are shown in green, and the premier cru villages, including Grauves, in yellow.

Grauves is located some 8 km south of Épernay, on the “back side” of the actual Côte des Blancs slope, in a valley formed by the stream Le Darcy. Le Darcy originates in Grauves and flows to northwest into the area Côteaux Sud d’Épernay. A forested area separates Grauves from the other villages in the Côte des Blancs.

Other than the Grauves village itself, the commune also contains the hamlets of Le Grand Pré, Montgrimaux, and Le Darcy.

The name Grauves is derived from the Latin grava, meaning gravel. A local nickname of the village is “Royal Coteau” since forest surrounds surrounds Grauves on several sides, a bit like a royal crown. Actually, a horse shoe would be a better description of the shape of the edge of the forest around the village, but perhaps too prosaic.

The Grauves commune covers 784 hectares and has 626 inhabitants (as of 2016), referred to as Gravriots and Graviotes.

The church and graveyard in Grauves with vineyards in the background. Picture linked from Wikimedia Commons (photo Quispiam, 2014).

On the now defunct échelle des crus scale, where 100% = grand cru and 90-99% = premier cru, a smaller number of villages had different numbers for white and black grapes, i.e., for Chardonnay and for Pinot Noir and Pinot Meunier. Grauves was one of them, with 95% for white grapes and 90% for black grapes, which in both cases meant premier cru status. Grauves has kept this premier cru following the abolishment of the échelle des crus, just like other villages that achieved it.

Single vineyard sites in Grauves include e.g. the following

Producers in other villages

This entry was posted in Champagne villages and tagged Grauves. Bookmark the permalink.