Located in: Montagne & Val de Reims: Massif de Saint-Thierry
Vineyards and grape varieties: 15.3 hectares (37.8 acres), of which 99.3% Pinot Meunier and 0.7% Pinot Noir.
Classification: “Autre cru” (83%)
Noted for: home village of Francis Boulard and of the only barrel maker in Champagne. 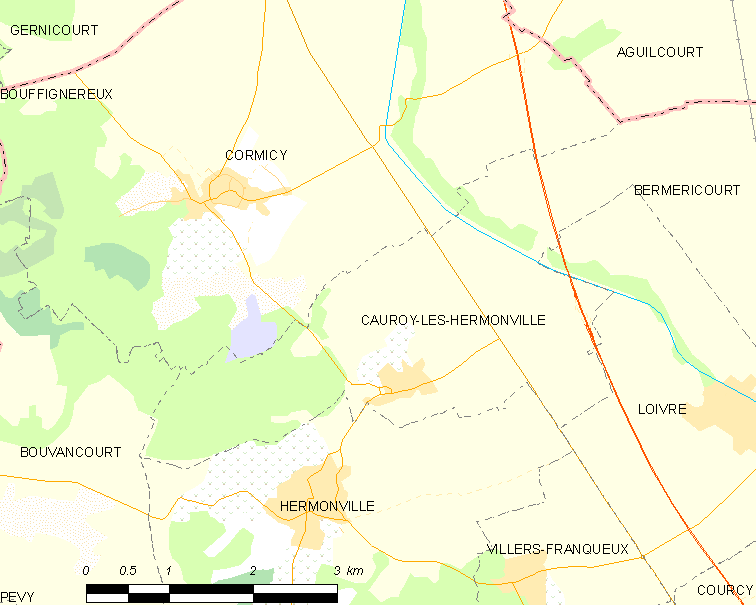 The map is linked from Wikimedia Commons, and the geographical information originates from OpenStreetMap. The dotted white area corresponds to the vineyards, light yellow is other open terrain, orange is built-up areas, and green indicates forest. The dashed red border is the departemental border between Marne (where Cauroy-lès-Hermonville is located) and Aisne.

Southsouthwest: Hermonville
Northnorthwest: Cormicy
Comment: several of the communes on the map are not part of the Champagne appellation and therefore don’t have any village profiles.

Cauroy-lès-Hermonville is located in the northwestern part of the Champagne region, a short distance northwest of Reims. With its location at 49° 21′ N, this village has the second most northerly location of all villages in the Champagne appellation. Only the neighbour Cormicy (49° 22′ N) is located even further north.

In Cauroy-lès-Hermonville, the only barrel maker of the Champagne region is located, Tonnellerie Artisanale de Champagne Ardenne. They start in 1998, and the production includes both traditional pièces champenoises of 205 liters and other sizes, and local oak is partially used. The customers can be found both among smaller producers and those larger houses that use oak barrels.

The vineyards in Cauroy-lès-Hermonville are located north of the village, on rather flat land with very mild slopes. Pinot Meunier dominates completely.

Single vineyard sites in Cauroy-lès-Hermonville include, among others:

This entry was posted in Champagne villages and tagged Cauroy-lès-Hermonville. Bookmark the permalink.