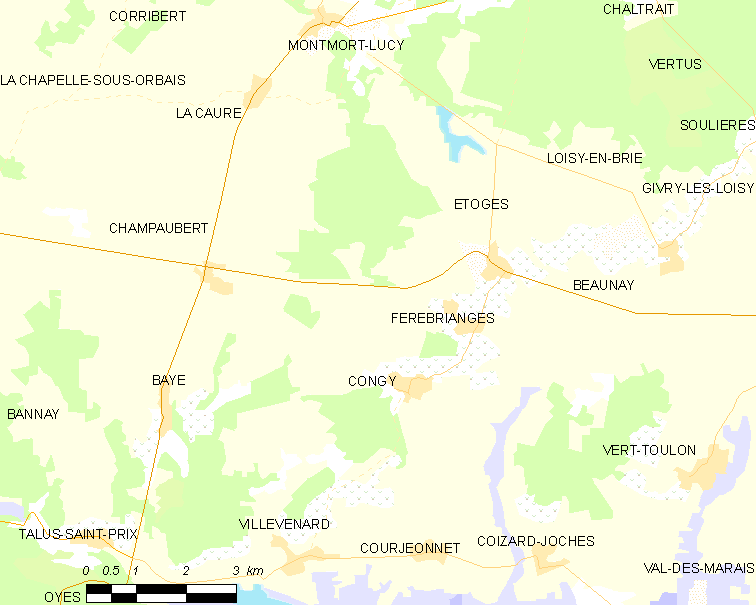 The map is linked from Wikimedia Commons, and the geographical information originates from OpenStreetMap. The dotted white area corresponds to the vineyards, light yellow is other open terrain, orange is built-up areas, green indicates forest, and blue/purple is water and wetland.

The town hall of Congy together with an older halle. Picture linked from Wikimedia Commons (photo G.Garitan, 2014).


Google Maps view with the villages in the Val du Petit Morin area highlighted. The area’s only premier cru village, Étréchy, is shown in yellow and the other villages in orange.

Congy is part of a string of villages located along a mild slope in the Val du Petit Morin (to the southwest of Côte des Blancs proper), a short distance above the small river Le Petit Morin.

The Congy commune covers 1747 hectares and has 235 inhabitants (as of 2012) referred to as Conginois and Conginoises.

The main part of the vineyards in Congy are located immediately to the north of the village, in a block continuous with those in Fèrebrianges. In this block, mild south-facing slopes dominate. There is also a block in the southern part of the commune, which is mostly made up of mild southwest-facing slopes. Pinot Meunier is the most common grape variety, but there is also a decent proportion of Chardonnay and Pinot Noir.

In Congy there are several sites with clayey topsoils on limeston which also contains a proportion of black flint.

Producer status is indicated where known: RM = récoltant-manipulant, or grower-producers. RC = récoltant-coopérateur, growers that are cooperative members but sell Champagnes under their own name. SR = société de récoltants, owned by a number of growers of the same family and sells under its own name.

This entry was posted in Champagne villages and tagged Congy. Bookmark the permalink.