Google Maps view with the villages in the Côte des Blancs highlighted. The grand cru villages, including Chouilly, are shown in green, and the premier cru villages in yellow.

The town hall (mairie, to the right in the picture) and the post office in Chouilly. Picture linked from Wikimedia Commons (photo G.Garitan, 2012).

Chouilly is located immediately to the east of Épernay and just south of Marne, at the stream Les Tarnauds. Those that continue east on the Avenue de Champagne from Épernay will after a while ending up in Chouilly.

Locally, Chouilly is associated with geese, that often can be seen at Les Tarnauds.

The Chouilly commune covers 1612 hectares and has 1005 inhabitants (as of 2012) that “more officially” are referred to as chouillats and chouillates. Due to the village’s association with geese, the alternative names bilots and oies are also heard.

In Chouilly we find Le Jardin de Vignes, a small park that shows up and explains various things related to the vineyards of Champagne, such as vine training methods and grape varieties.

The hill Butte du Saran is located in the southern part of the commune. Near the hill we find the palace Château de Saran, which is owned by Moët & Chandon. It was built in 1801 by Jean-Remy Moët and was extended in 1846 by Victor Moët to its present size. In 1952, the palace was willed to the Auban-Moët hospital in Épernay to be used as a convalescent or retirement home. Since the property turned out to be unfit for this purpose, the hospital sold the château to Moët & Chandon in February 1954. Since then, Château de Saran is used for hospitality purposes.

Other single vineyard sites in Chouilly include Ronds Buissons and Le Vallon.

Moët & Chandon has produced special wines using Chardonnay from their Saran property in Chouilly at different occasions. In former times, a still Chardonnay wine, i.e., a Coteaux Champenois Blanc de Blancs, was produced under the namne Saran and using a “Dom Pérignon-like” label (but black with gold letters). Later, but now rather many years ago, Les Vignes de Saran was included as the Chardonnay in the box La Trilogie des Grands Crus, which contained three varietal Champagnes from three different grand cru villages, where the Pinot Noir was from Aÿ and the Pinot Meunier from Sillery.

Champagnes from Chouilly are usually said to be of a rather “rich” style with buttery notes or aromas of tropical fruit, and with less intense mineral character than the grand cru neighbours to the south. It may be noted that the vineyards in Chouilly are less uniform in slope and direction that those in e.g. Avize, Oger, and Le Mesnil-sur-Oger. Therefore, it may be a bit more difficult to make generalised statements about the Chouilly style than the styles from those villages.

Formerly a grand cru for Chardonnay only

On the now defunct échelle des crus scale, where 100% = grand cru and 90-99% = premier cru, a smaller number of villages had different numbers for white and black grapes, i.e., for Chardonnay and for Pinot Noir and Pinot Meunier. Chouilly was one of them, with 100% for white grapes, meaning grand cru, and 95% for black grapes, meaning premier cru. Following the formal abolishment of the échelle des crus in 2010, the villages that achieved grand cru or premier cru status has kept this status. However, no difference is longer made between different grape varieties, so the highest status is retained. This means that Chouilly is nowadays a grand cru village with no restrictions as to grape varieties.

In older times, Chouilly was a premier cru village, and was promoted to its grand cru status (or to be more specific, its mixed grand cru/premier cru status) in 1985, together with Oger, Oiry, Le Mesnil-sur-Oger, and Verzy.

Overview of the village with vineyards in the background. Picture linked from Wikimedia Commons (photo Sand~commonswiki, 2006). 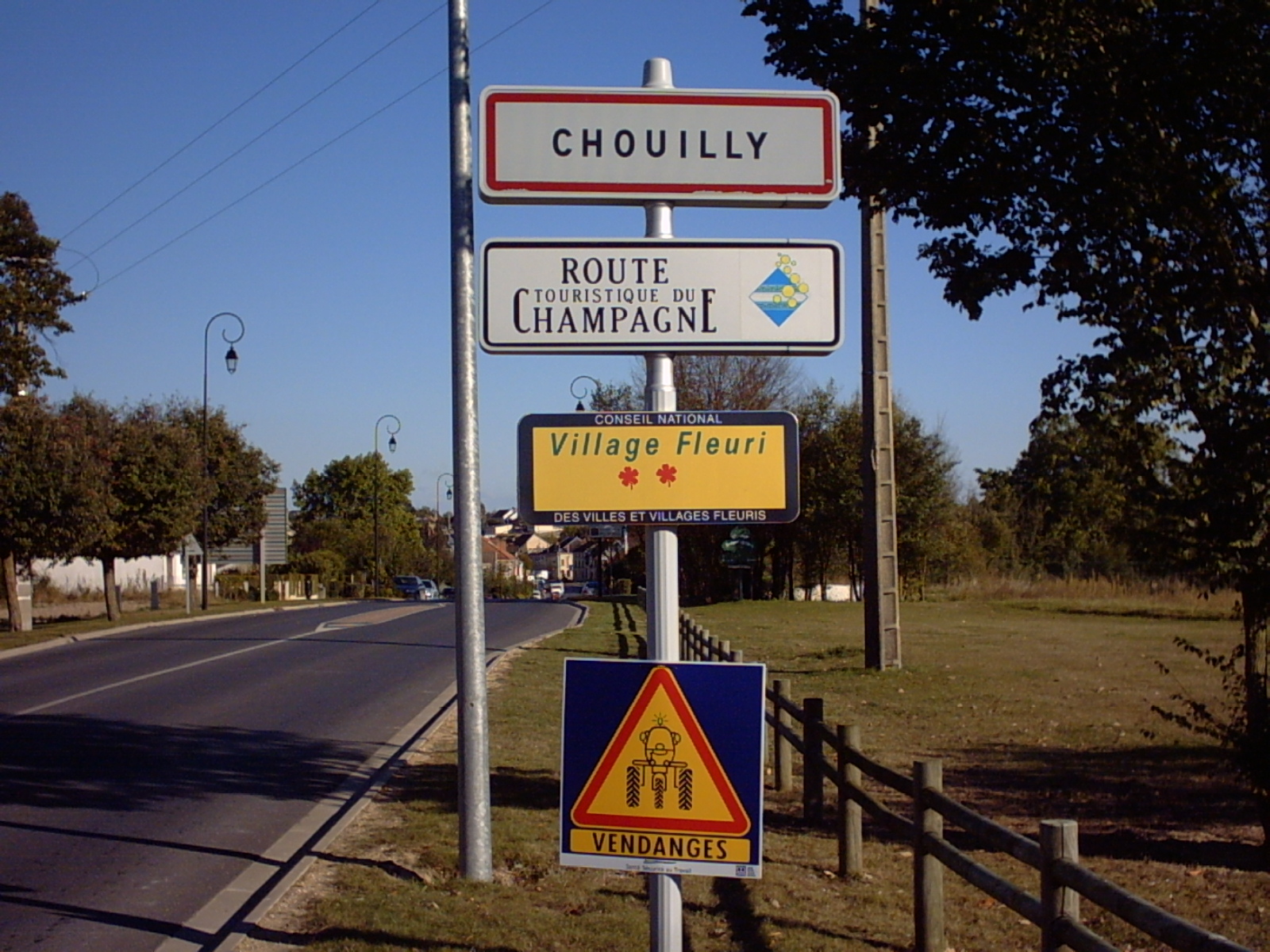 One of the entrances to Chouilly. Picture linked from Wikimedia Commons (photo Sylvainf, 2006).

Pictures from vineyards in Chouilly in connection with the 2012 harvest and an interview (French audio, English subtitles) of Olivier Gimonnet from Pierre Gimonnet & Fils in Cuis:

This entry was posted in Champagne villages and tagged Chouilly. Bookmark the permalink.