Northnortheast: Oiry, grand cru
South: Oger, grand cru
West: Grauves, premier cru
Northnorthwest: Cramant, grand cru
Comment: some of the communes on the map, one to the west and two on the flatlands to the east, are not part of the Champagne appellation and therefore don’t have any village profiles.

View of Avize from the vineyards to the northwest of the village. Picture linked from Wikimedia Commons (photo Gilles.callot, 2007).

Avize is located to the southsoutheast of Épernay, as one of the villages on the “genuine” Côte des Blancs slope. The upper part of the village itself is located in the middle of the slope, along the D10 road that runs from Épernay to several of the other Côte de Blancs villages.

The Avize commune covers 762 hectares and has 1791 inhabitants (as of 2012), referred to as avizois and avizoises.

In Avize we find Les Avisés, an ambitious boutique hotel and restaurant run by the Selosse family in a building that used to belong to the Bricout Champagne house.

In Avize, the Champagne region’s only “practical” school of viticulture and oenology is located. It used to be called Lycée Viticole but is now known as Viti Campus since it also educates at other levels than lycée = high school/secondary school. The school is partly an agricultural secondary school with a focus on wine/Champagne production, which leads up to various versions of the “Bac” (the French high school diploma), and partly a vocational college with courses of up to two years for those that already have a Bac or a college education. The school started in 1927 and was built on a donation from 1919 by a négociant who died without direct heirs. In 1952, a winemaking cooperative was started with former students as members. The school has the use of 10,08 ha of vineyards, of which 3,23 ha are owned, 3,99 ha are leased, on 2,19 ha viticultural services are provided, and 0,67 ha is land outside the appellation.

For those that wish to study at higher level, the closest place of training has traditionally been the Université de Bourgogne in Dijon, where a full university-level programme in viticulture and oenology has existed for a long time. In France, such programmes traditionally also exist in Bordeaux and Montpellier. Nowadays, there are also two master’s programmes in the field Science de la vigne et du vin (“science of the vine and wine”) at the Université de Reims, called Vins et Champagne and Viticulture et Environnement. These are two year programmes for those that already have a non-wine specific scientific or technical university degree. 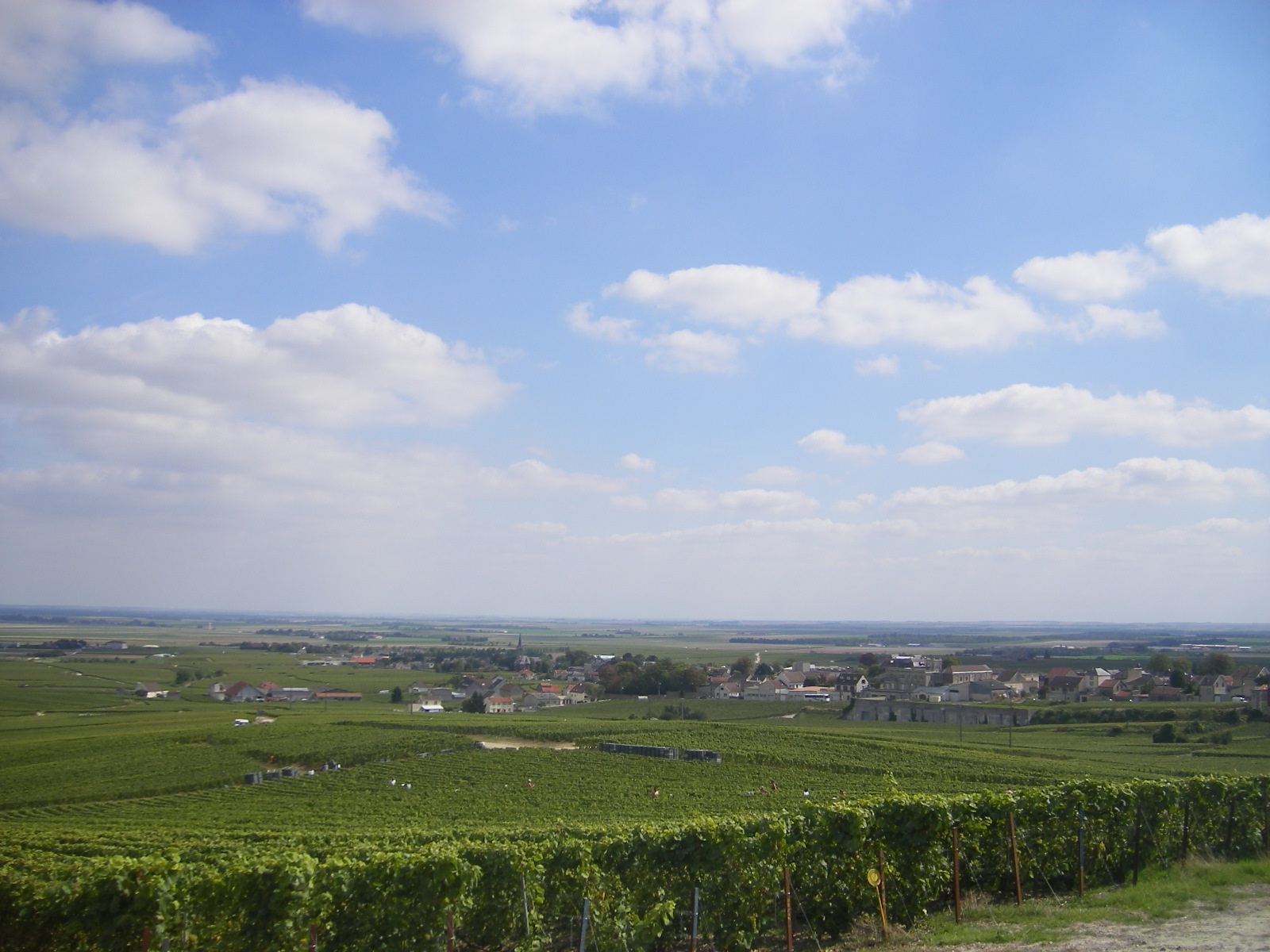 Vineyards in the northeastern part of Avize, closest to the village, with the eastern part of the village in the background. Photographed from the road between Avize and Cramant. Picture linked from Wikimedia Commons (photo Szeder László, 2007).

The vineyards in Avize are located around the village. East-facing slopes dominate this village, but vary from more inclined above the village (close to the edge of the forest above the Côte des Blancs slope) to almost flat land below the village, e.g. close to the southern outskirts of the Oiry commune and the D9 road.

In the foreground vineyards in the northern part of Avize, west of/above the road to Cramant. The hill in the background is the Butte de Saran in Chouilly, and the vineyards just below it are located in Cramant. Photo taken in October 2011.

Considering the similar locations of Avize, Oger, and Le Mesnil-sur-Oger on the Côte des Blancs slope, the difference in style between them aren’t that big. This is the area where we should expect blanc de blancs that combine intense minerality, high acidity and a lot of concentration to a higher degree than anywhere else. Elsewhere, a blanc de blancs could be a bit leaner, more acid-dominated, less mineral-driven, softer, spicier or more fruity.

Producer and vintage is likely to play a more important role in determining the style than the specific village within this area, as well as the location of the vineyard(s) – in the slope above/around the villages or below on the slope.

When individual villages are assigned a style, Avize is often considered to be the origin of the “toughest” blanc de blancs Champagnes of them all, with good concentration and prominent minerality. An alternative description is that they are elegant, which also happens to be a common description of the style of the neighbouring village Cramant.

The big Champagne bottle of Avize, which is located in the slope above the village. Photo taken in October 2011.

In Avize, there are also facilities belonging to the Reims-based Champagne houses Louis Roederer and Veuve Clicquot.

In the foreground vineyards in northeastern Avize, east of/below the road to Cramant. The hill to the left in the background is the Butte de Saran in Chouilly. Photo taken in October 2011.

Producer status is indicated where known: RM = récoltant-manipulant, or grower-producers. RC = récoltant-coopérateur, growers that are cooperative members but sell Champagnes under their own name. SR = société de récoltants, owned by a number of growers of the same family and sells under its own name. Smaller producers are placed under this heading when no information regarding producer status is available.

This entry was posted in Champagne villages and tagged Avize. Bookmark the permalink.