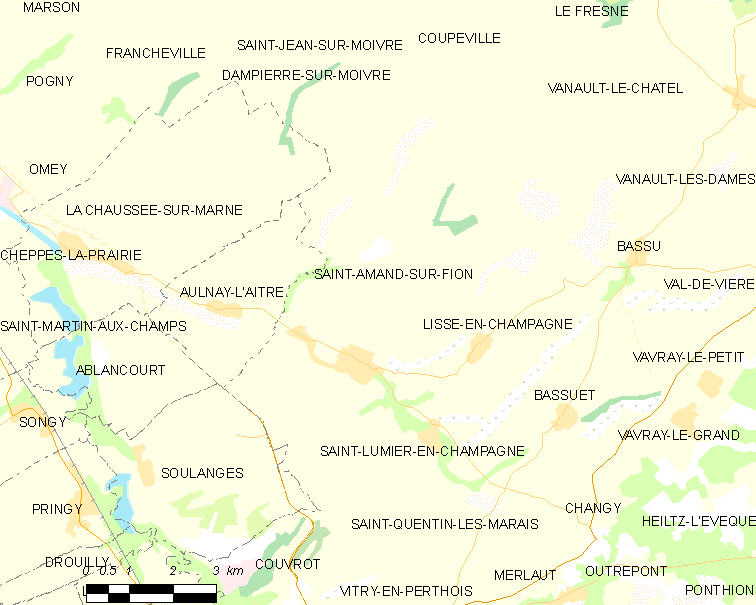 Neighbouring villages within the Champagne appellation

East: Lisse-en-Champagne
Southeast and south: Saint-Lumier-en-Champagne
Comment: some of the communes on the map are not part of the Champagne appellation and therefore don’t have any village profiles.

The Saint-Amand-sur-Fion commune has a surface of 2840 hectares and has 1060 inhabitants (as of 2014), referred to as Godins and Godines.

The vineyards in Saint-Amand-sur-Fion are located in two blocks to the east of the village, and is composed of mild southwest- to south-facing slopes. The vineyards are continuous with those in Lisse-en-Champagne. Chardonnay is the only grape variety in the vineyards.

Viticulture in Saint-Amand-sur-Fion and the rest of the Vitryat area has a long history, and compared to the current situation today, it was much more extensive until the 19th century. Several sources from the years 1736-1778 give figures of 194-228.5 ha of vineyards in Saint-Amand-sur-Fion, with some decline around 1770 due to a vine disease. The land register 1790-1791 showed that Saint-Amand-sur-Fion was one of four communes in the Vitryat with more than 200 ha of vineyards. Later, the vineyard surface in the area reduced slowly, followed by a faster decline following the Phylloxera epidemic.

In 1927, there was still 62 ha of vineyards, but Saint-Amand-sur-Fion fell out of the Champagne wine region due to the regulations that were created thereafter and in the mid-20th century. A review of the Vitryat area was initiated by the INAO in 1962, but it was only in 1989 when Saint-Amand-sur-Fion was (re)admitted into the appellation, then as one of 13 communes in the Vitryat. Initially, 3 ha on the Côte Adam was approved, and later another 9 ha of vineyards were approved, corresponding to the 12.3 ha there were cultivated in 2013.

This entry was posted in Champagne villages and tagged Saint-Amand-sur-Fion. Bookmark the permalink.