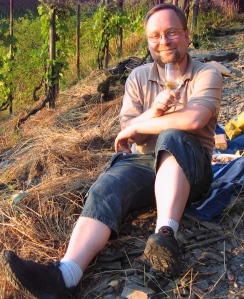 So, who am I? Tomas is my name, 46 is my age, and wine is my main hobby. When i started this blog in 2010 I was living and working in Brussels, Belgium, but in early 2012 I returned to my more permanent home of Stockholm, Sweden. Four years in Belgium, which unlike Sweden has a free market for wine rather than a monopoly, has definitely influenced my outlook as a wine drinker.

I’m active in a large Swedish wine tasting association known as “Munskänkarna” (the literal translation is apparently “cup-bearer” if that makes you any wiser), which also has a fairly active chapter among the Swedish expats in Brussels. I was the course coordinator for our chapter there until i returned to Sweden, and now I arrange some classes in the Stockholm chapter. In 2007, I passed the “level 2” examination of this association – a fact which probably tells most of you nothing, but “roughly equivalent to WSET Advanced Certificate” might do. I passed the “level 3” theoretical and practical tests in 2008 & 2009 – that’s the highest level and should correspond to WSET Diploma – but I must get around to writing a paper before I’ve actually past the examination at this level.

I sometimes also taste wine in two other wine tasting clubs: AuZone in Stockholm and formerly CAV in Brussels.

Off and on I’m fairly active as a Wikipedian, and a member of English Wikipedia’s WikiProject Wine, although I’ve not been too active in that project in recent times.

I try to keep two different language versions of this blog – English and Swedish. My level of activity in English is somewhat varying, and I add material a bit more regularly to the Swedish version at vintomas.wordpress.com. (Those posts from the last couple of years that haven’t been translated are usually about Sweden-specific stuff, such as rants about our alcohol monopoly or what our politicians say about the monopoly or alcohol tax.) Most of my blog posts are about tastings of several wines, sometimes with some additional reflections, and a short post with just a tasting note of one or two wines is very rare. When I like to write tasting notes on one or two wines without too much additional comments, I usually put them on Cellartracker instead. My account is called vintomas, and here you can see an overview of the tasting notes I’ve added.

If you wish to contact me you could send mail to my g,m-a i,l address (remove the non-letter characters and you should get the idea) where I’m tomas dot eson, or write a comment to a blog post and mention that you want me to call you back.

19 Responses to About me