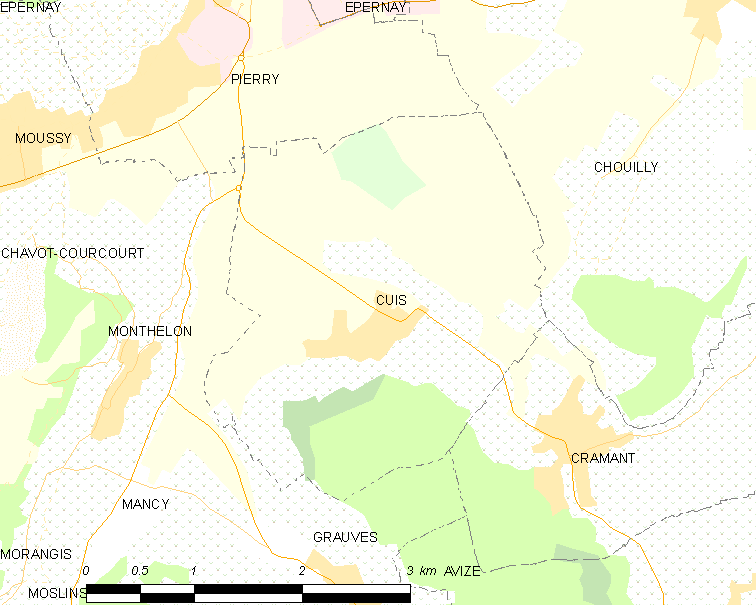 
Google Maps view with the villages in the Côte des Blancs highlighted. The grand cru villages are shown in green, and the premier cru villages, including Cuis, in yellow.

Cuis with the church in the foreground. The picture is taken from the hill south of the village with the camera directed northwest. The vineyard-clad slopes in the background are located in Pierry and Moussy. Picture linked from Wikimedia Commons (photo October Ends, 2011).

The Cuis commune covers 827 hectares and has 408 inhabitants (as of 2012), referred to as Cuitats and Cuitates.

Grapes from Cuis often give slightly lighter blanc de blancs Champagner than those from the nearby grand cru villages, not in the least due to the more-or-less north-facing slopes, and the level of acidity tends to be quite high. Properly used, this style can give firm Champagnes where the minerality comes to the fore even more than usual, and “aperitif Champagnes” of the elegant kind. This “lightness” probably explains why it is less common to find oaked Cuis-only Champagnes compared to oaked versions from the grand cru villages.

On the now defunct échelle des crus scale, where 100% = grand cru and 90-99% = premier cru, a smaller number of villages had different numbers for white and black grapes, i.e., for Chardonnay and for Pinot Noir and Pinot Meunier. Cuis was one of them, with 95% for white grapes and 90% for black grapes, which in both cases meant premier cru status. Cuis has kept this premier cru following the abolishment of the échelle des crus, just like other villages that achieved it.

This entry was posted in Champagne villages and tagged Cuis. Bookmark the permalink.