Located in: Vallée de la Marne: Côteaux Sud d’Épernay
Vineyards and grape varieties: 109.4 hectares, of which 50% Pinot Meunier, 32% Chardonnay, and 18% Pinot Noir.
Classification: Premier cru (90%)
Noted for: the only premier cru village in its area; the village where the Benedictine brother Jean Oudart was active. 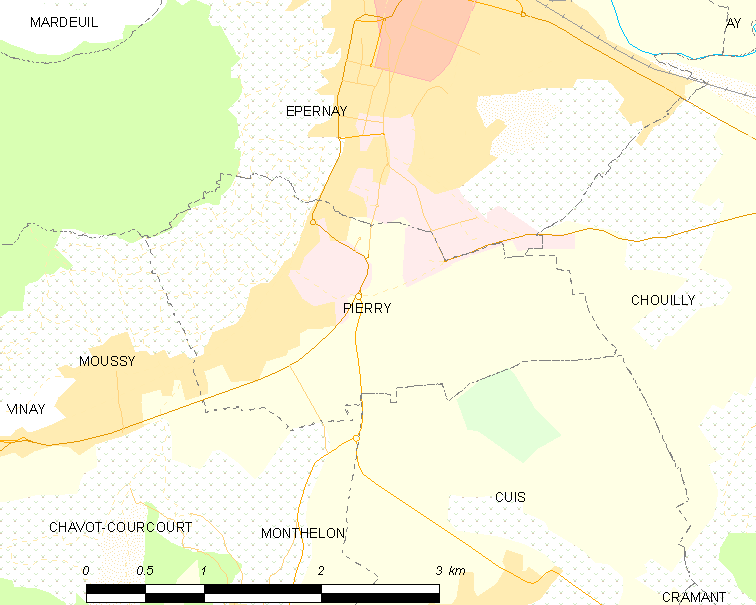 The map is linked from Wikimedia Commons, and the geographical information originates from OpenStreetMap. The dotted white area corresponds to the vineyards, light yellow is other open terrain, orange is built-up areas, dark orange is dense built-up areas, and green indicates forest.


Google Maps view with all the villages in the Côteaux Sud d’Épernay area highlighted. Pierry is in yellow as the premier cru village of the area, and the other villages are shown in orange. 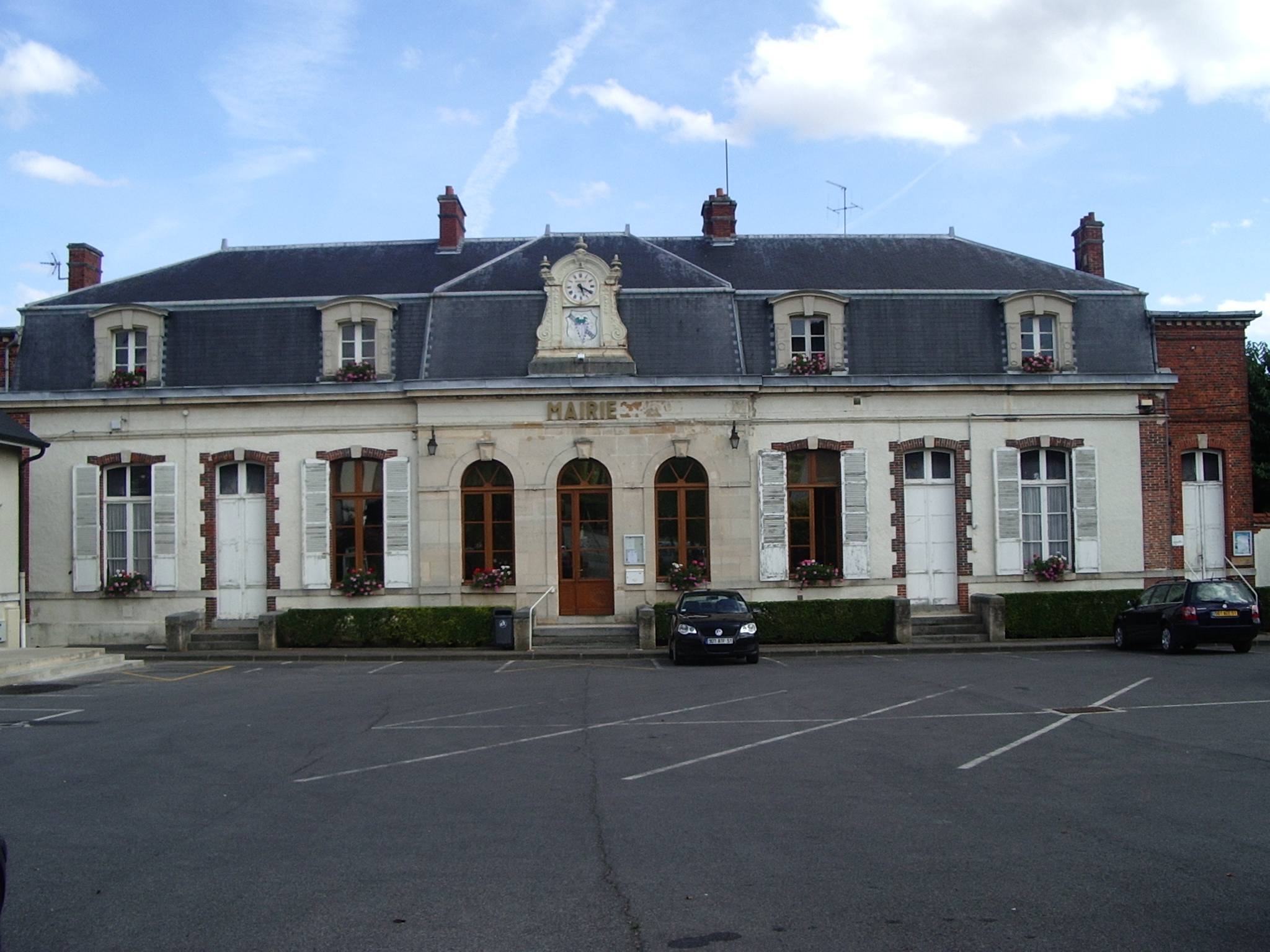 Pierry is located immediately to the south of Épernay, and has grown together with the southern parts of Épernay. The village is located at the foot of the slope where the vineyards are located. The stream Le Cubry, which forms the valley that continues to the west, run just below the village and empties into the Marne river at Épernay. The stream Le Darcy, which forms the valley to the southsoutheast (around Grauves), empties in Le Cubry at Pierry.

Château de la Marquetterie, in the top right-hand side of the picture, surrounded by vineyards on the slopes above Pierry. Picture linked from Wikimedia Commons (photo G.Garitan, 2012).

The Château de Pierry, which is owned by Champagne producer Paul Gobillard, rents out halls for conferences and parties. Another château in the village, Château Les Aulnois, is run as a hotel.

The cookie producer Fossier from Reims, a source of the locally well-known pink biscuits, has a shop in Pierry.

The Pierry commune covers 516 hectares and has 1179 inhabitants (as of 2013), referred to as Pierritiers and Pierritières.

Jean Oudart’s tomb in the church in Pierry, with a more contemporary stone. Picture linked from Wikimedia Commons (photo Animationspierry, 2012)

Jean Oudart (1654-1742) was a Benedictine brother who was active in Pierry from 1679 to his death, and who was a prominent winemaker. This means he was a contemporary of Dom Pierre Pérignon (1638/9-1715) in Hautvillers and Dom Thierry Ruinart (1657-1709), who also were Benedictines. In more recent times, Jean Oudart have sometimes been referred to as “Dom Oudart”, but since he was a lay brother (frère convert) he wasn’t a priest, and therefore the honorific “Dom” should not be used for him. Frère Oudart, on the other hand, is correct.

That the wines of Oudart were highly appreciated is shown by the fact that in the year 1700, the wines from Pierry and Hautvillers fetched twice prices in Paris compared to other good wine from the region: 800-980 livres per queue (approx. 400 liters) versus 400-550 for those deemed bons or plus excellents, 300 for those deemed médiocrement bons qui sont pourtant bons and 150-200 for those below that level. The most sought-after Pierry wine was that from the vineyard Le Clos Saint-Pierre.

Following the French Revolution, when the French state confiscated all church property, the Benedictine house in Pierry was sold. In 1999, this building was bought by the Pierry commune.

The Benedictine house in Pierry with its garden. Picture linked from Wikimedia Commons (photo Animationspierry, 2013).

The vineyards in Pierry are located on the slopes to the west of Épernay, and mostly consist of southeast-facing slopes. Pinot Meunier is the most common grape variety. The vineyards are continuous with those of Épernay and Moussy.

Champagne houses that use vineyards in the village include Taittinger.

On the now-defunct échelle des crus, Pierry was rated 90%, which has made it to a premier cru village. It is the only village in the Côteaux Sud d’Épernay that is classified premier cru. Its three neighbouring communes in the same area were rated 88%. It was reasonably the homogenous slope of the vineyards, in a wider part of the valley, that resulted in Pierry being rated slightly higher than its neighbours. Possibly the soils contributed as well; a local saying is Pierry est pierreux, “Pierry is stony”.

The stream Le Cubry in the Parc du Ru in Pierry. This stream forms the valley and the slopes that are planted with vineyards in Pierry and the surrounding villages. Picture linked from Wikimedia Commons (photo G.Garitan, 2012).

Producer status CM = Coopérative de manipulation, a cooperative that sells Champagnes produced from the members’ grapes, often under a brand owned by the cooperative.

The world’s largest champagne flute is on display at the cooperative in Pierry. Its height is 2.13 meters and the volume 117 liters. The picture is linked from Wikimedia Commons (photo Cellierspierry, 2013).

This entry was posted in Champagne villages and tagged Pierry. Bookmark the permalink.