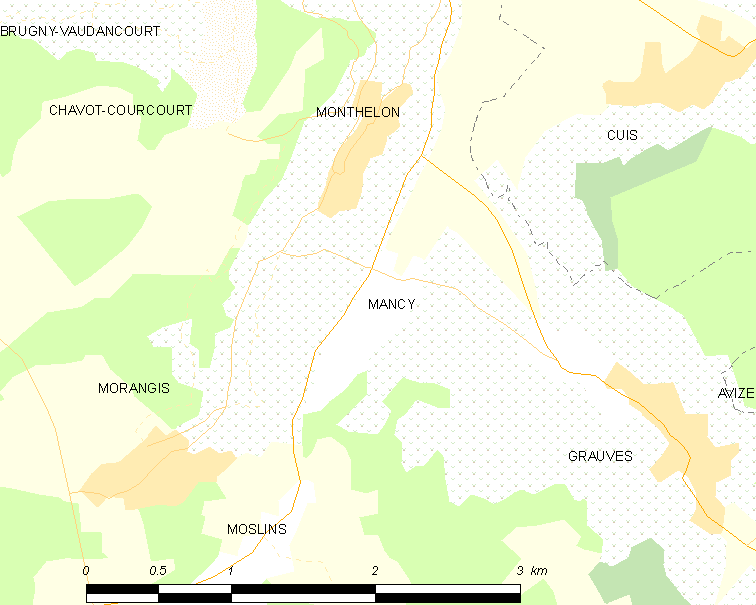 
Google Maps view with all the villages in the Côteaux Sud d’Épernay area highlighted. The premier cru village of the area, Pierry, is in yellow and the other villages, including Mancy, are shown in orange.

The Mancy commune covers 357 hectares and has 268 inhabitants (as of 2013), referred to as Mancéens and Mancéennes.

The vineyards in Mancy are spread over the commune, on both banks of Le Darcy and Le Mancy. The vineyards in the western part of the commune are located on slopes on the left bank of Le Mancy, and are continuous with those in Monthelon, Morangis, and Moslins. The vineyards in the central and eastern parts of the commune, between Le Mancy and Le Darcy, as well as a smaller vineyard surface on the right bank of Le Darcy, are continuous with those in Grauves. Due to its location in a forked valley, the direction of the slopes vary, but are mostly southeast in the western part of the commune. Chardonnay is the most common grape variety, but the proportion of Pinot Meunier is only slightly less.

Single vineyards in Mancy include Les Hautes Norgeailles and Les Bas Putroux that are used by Laherte Frères in Chavot-Courcourt for their Champagne Les Vignes d’Autrefois.

This entry was posted in Champagne villages and tagged Mancy. Bookmark the permalink.