Champagne village profile: Sainte-Gemme on the right bank of the Marne valley 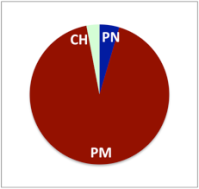 The map is linked from Wikimedia Commons, and the geographical information originates from OpenStreetMap. The dotted white area corresponds to the vineyards, light yellow is other open terrain, orange is built-up areas, and green indicates forest. The dashed red line in the left-hand part of the map is the departmental border between Marne (where Saint-Gemme is located) and Aisne.

Sainte-Gemme is located on the right bank of the Marne river, which means north of the river, but not directly at the Marne. The A4 motorway between Paris and Reims runs through the northern part of the commune.

The Sainte-Gemme commune covers 725 hectares and has 144 inhabitants (as of 2014), referred to as Saint-Gemmois and Saint-Gemmoises.

The vineyards in Sainte-Gemme are located around the village and to its south, and are continuous with those in Passy-Grigny. The vineyards consist of mild slopes, including south-facing slopes, and are completely dominated by Pinot Meunier.

Krug uses about 15%-25% Pinot Meunier in their non-vintage/multivintage Grande Cuvée, in Krug Rosé, as well as in Krug Vintage. This house often sources some of its Pinot Meunier from Sainte-Gemme, almost always together with Villevenard in the Val du Petit Morin, and sometimes from some other villages such as Courmas in the Vesle et Ardre and Leuvrigny on the left bank of Marne. The vineyards in Sainte-Gemme that are used by Krug are south-facing slopes on clay soils, that often do particularly well in hot vintages. Veuve Clicquot also frequently uses grapes from Saint-Gemme.

This entry was posted in Champagne villages and tagged Sainte-Gemme. Bookmark the permalink.

1 Response to Champagne village profile: Sainte-Gemme on the right bank of the Marne valley