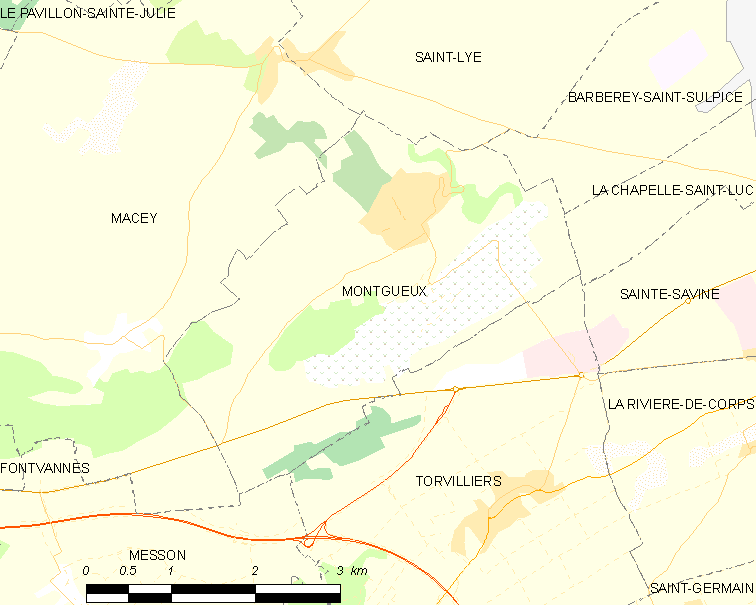 The map is linked from Wikimedia Commons, and the geographical information originates from OpenStreetMap. The dotted white area corresponds to the vineyards, light yellow is other open terrain, orange is built-up areas, and green indicates forest. Troyes is located just outside the map to the east.

None of the communes that border to Montgueux are part of the Champagne appellation.

Montgueux is located rather far to the south in the Champagne wine region, in the Aube departement. The village is situated a few kilometers west of the Troyes, the departemental capital with 60 000 inhabitants in the commune and 130 000 in Greater Troyes. It is by far is the largest city in this part of the region.

The Montgueux commune also includes the hamlet La Grange au Rez, in the southwestern part of the commune along the D660 road, and some producers are included here.

The Montgueux commune covers 1125 hectares and has 405 inhabitants (as of 2013), referred to as Montgueuillats and Montgueuillates. 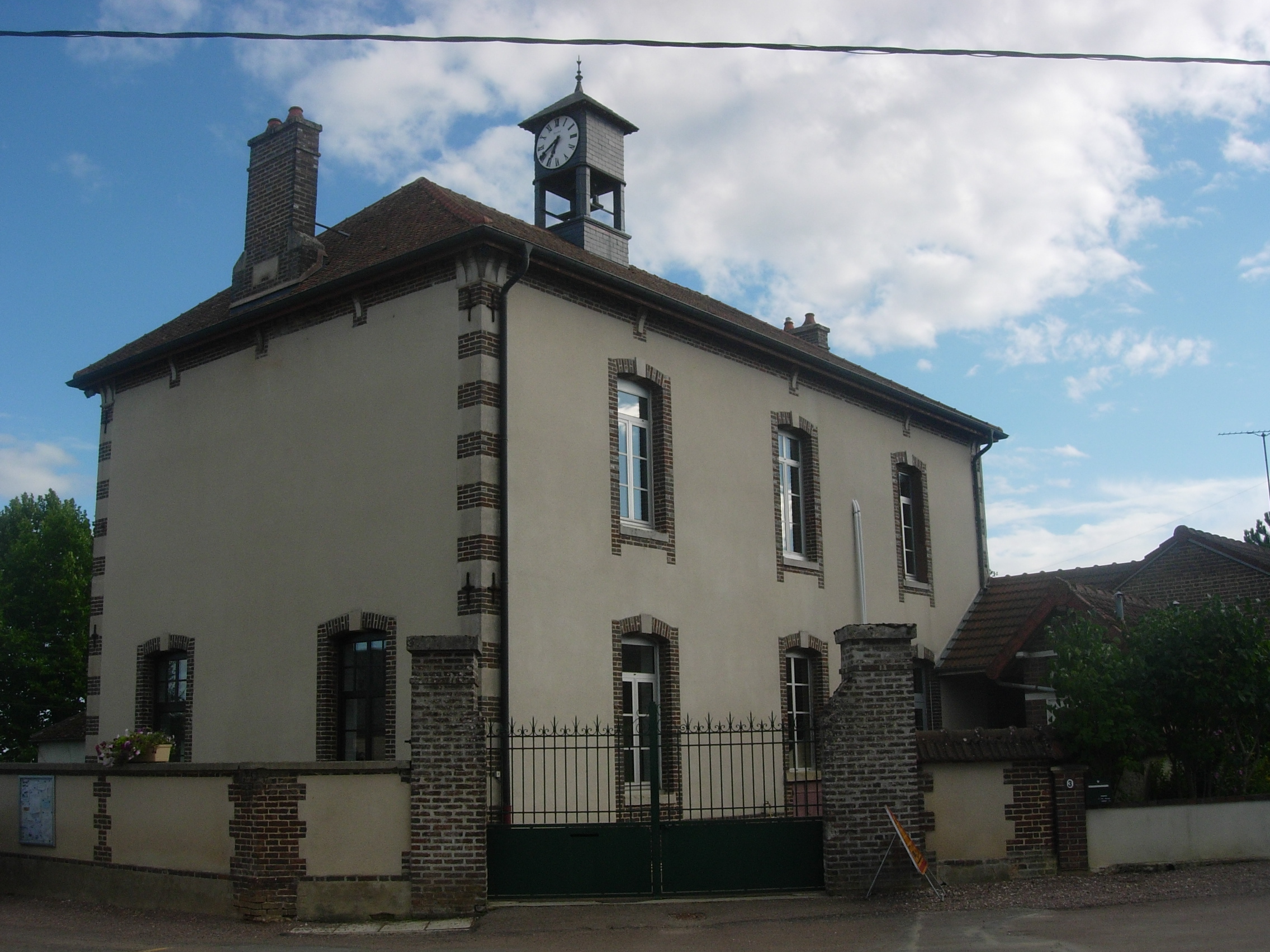 In the scheme used by the Union de Maisons de Champagne (UMC), Montgueux is one of 17 areas (“terroirs”) that the Champagne wine region is divided into. These 17 areas are then grouped into four subregions, one of which is Côte des Blancs, which the Montgueux area is part of. This subregion was formerly referred to as “Côte des Blancs et environs” by UMC. It may be somewhat confusing that there also is an area called Côte des Blancs (i.e., the same name as the subregion).

Montgueux is the only commune of the Montgueux area, since there are no neighbouring villages with vineyards. The closest areas are Sézannais to the northwest and Vitryat to the northeast.

Of the Champagne-producing villages in the Aube department, 63 of 65 are part of the Pinot Noir-dominated Côte des Bar, which is divided into Barséquanais (around Bar-sur-Seine) and Bar-sur-Aubois (around Bar-sur-Aube). The two exceptions are Montgueux, which forms an area of its own, and Villenauxe-la-Grande which is located in the Sézannais area (where the other villages are in the Marne departement). Both these villages are clearly Chardonnay-dominated.

Future expansion plans of the area

In the expansion proposed for the Champagne wine region/appellation with 40 new communes (on top of the current 319, while 2 are removed), no less than 11 of the communes are located just to the west and south of Montgueux. They are Bouilly, Fontvannes, Javernant, Laines-aux-Bois, Macey, Messon, Prugny, Saint-Germain, Souligny, Torvilliers, and Villery.

It wouldn’t surprise me if the area will be referred to as something else than Montgueux when it is expanded to twelve villages, perhaps Côtes de Troyes or something similar.

Below a Google Maps view of Montgueux and the proposed new Champagne villages. Montgueux shown in orange and the rest in white.

The vineyards in Montgueux are mostly located together in one block to the south of the village. The whole planted area is in a mild southsoutheast-facing slope. The soil is partly clay, which is typical for all of Aube (i.e., also Côte des Bar) but also chalk, in similarity to the Côte des Blancs. Chardonnay dominates greatly in the vineyards.

Montgueux is (together with Villenauxe-la-Grande) one of only two villages in the Aube departement that are Chardonnay-dominated.

On the new-defunct échelle des crus, Montgueux was rated 80%, the lowest number on the scale. This is in similarity to all other villages in the Aube department except one (Villenauxe-la-Grande). This means that Montgueux is an “autre cru”, and had a number as far as possible from premier cru or grand cru. Despite this, Montgueux today enjoys a very good reputation for Chardonnay, and is counted as one of the very best Chardonnay villages outside the “heartland” in the Côte des Blancs. The village has been referred to as “The Montrachet of Champagne”, a nickname which is usually attributed to Daniel Thibaut, former winemaker of Charles Heidsieck. It is probably fair to think of Montgueux as a village whose real quality potential is at premier cru level.

The “one size fits all” treatment of the villages in the Aube department, including really good villages such as Montgueux and Les Riceys, had historical origins and was one of the weaknesses of the échelle des crus.

Chardonnay from Montgueux has long been popular among the large houses, the négociants that are mostly located in Reims and Épernay.

Vineyards in Montgueux. Note that the vines are cultivated on the slope, but that other plantations take over on the flat land below the slope. Picture linked from Wikimedia Commons (photo Superjuju10, 2011).

Some producers are located in nearby communes which are not part of the production zone where the vineyards are found. There are no village profiles for these villages, so I have chosen to list some producers here, by commune:

This entry was posted in Champagne villages and tagged Montgueux. Bookmark the permalink.