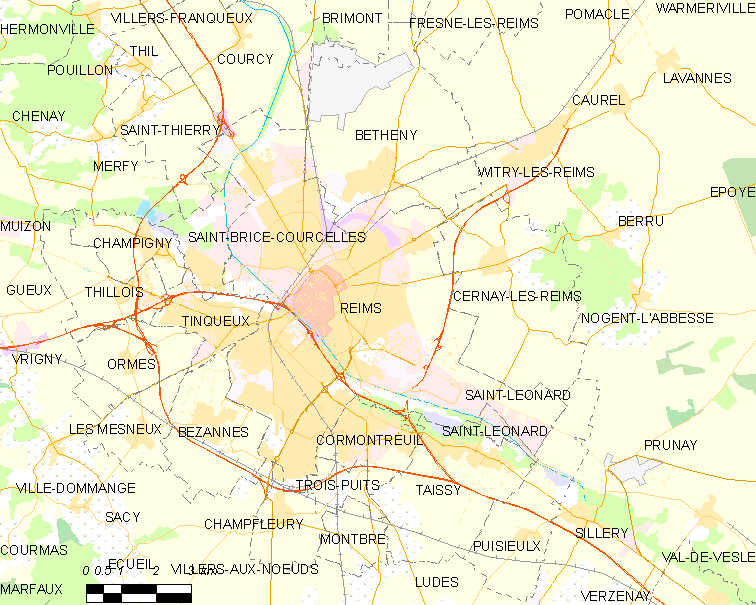 
Google Maps view with the villages in the Vesle et Ardre highlighted. The premier cru villages are in yellow and the autre cru villages are in orange. The La Petite Montagne de Reims part is shown within red borders and the Vallée de la Vesle part within green borders.

The Reims commune has a surface of 4702 hectares (18.15 sq mi) and 184 075 inhabitants (as of 2015), called Rémois and Rémoises. Including suburbs the entire urban area – aire urbaine – has 320 276 inhabitants (as of 2014). By a wide margin, Reims is the largest city in the Marne department as well as the now-defunct administrative region Champagne-Ardenne (which also included the Ardenne, Aube, and Haut-Marne departments), but it is Châlons-en-Champagne which is the departmental capital and which used to be the regional capital. In the merged region of Grand Est, formed 1 Januari 2016, Reims ends up in the fifth place among the communes and in the fourth place among the urban areas. Strasbourg in Alsace is the regional capital of Grand Est.

Reims is located in the northern part of the Champagne wine region, north of the Montagne de Reims hill. In the Reims commune itself, there is also some amounts of vineyards here and there, despite the built-up areas of the city. However, the more continuous vineyards start only in the suburban communes south of Reims.

In Reims, we find the largest concentration of major Champagne houses, although Épernay is the home of almost as many houses (but fewer of the very largest). The deep chalk soils under the city made for good conditions for digging the deep and cool cellars that provided excellent storage conditions for millions of Champagne bottles, before air conditioning saw the light of day. Some of the Champagne houses that are located on the eastern side of Reims have used old chalk pits dating from the Roman era, called crayères, as part of their cellars.

The most well-known landmark of Reims is the Notre-Dame de Reims, the impressive Gothic-style cathedral which in former times was used to crown the kings of France.

Reims and its suburbs currently (2016) sport four restaurants with stars in the Guide Michelin: L’Assiette Champenoise (on the southern side, in Tinqueux) with three stars, Le Parc Les Crayères (in the southeastern part of the city, between Pommery and Veuve Clicquot) has two stars, while Le Foch and Le Millénaire both have one star and are located in the city centre. One restaurant has a Bib Gourmand: Le Pavillon CG. Other restaurants that can be recommended are Le Jardin des Crayères (the bistro of the two-star Les Crayères) and The Glue Pot.

Outside the city, the closest starred restaurant is the excellent Le Grand Cerf (one star) in Montchenot, a village in the Villers-Allerand commune, located on the northern side of the Montagne de Reims.

One of the local specialities is the biscuit producer Fossier and their pink cookies, that many eat diped in Champagne. The Fossier factory is located in northern Reims and they have three shops of their own in the city.

This entry was posted in Champagne, Champagne villages and tagged Reims. Bookmark the permalink.

3 Responses to Reims – the largest city in Champagne, part 1