View of Dizy from the vineyards above the village, with Épernay in the background. Picture linked from Wikimedia Commons (photo October Ends, 2012).

Dizy is more-or-less continuous with the built-up area of Épernay, although the village is located on the other side (the north side) of the Marne canal (canal latéral à la Marne) with Magenta located in-between.

The Dizy commune covers 323 ha and counts 1561 inhabitants (as of 2012) called Dizyciens and Dizyciennes respectively. The actual village is located just east of the D951 road, which is the closest route between Reims and Épernay. Most drive-around visits to Champagne tends to include at least one tour on D951 and pass through the roundabout just west of Dizy.

Since alcoholic beverages are produced here, the name Dizy tends to cause some amusement among English-language visitors. The same thing is true for the village of Bouzy.

View of the northern part of Dizy (the Terre du Crayon area) from the vineyards above the village, with Hautvillers visible in the background. Picture linked from Wikimedia Commons (photo October Ends, 2012).

The vineyards in Dizy are predominantly south-facing slopes, with mixed grape varieties.

Champagne houses that use vineyards in this village include Bollinger, Moët & Chandon, Perrier-Jouët, and Roederer.

Other single vineyard sites in Dizy include Moque-bouteille. 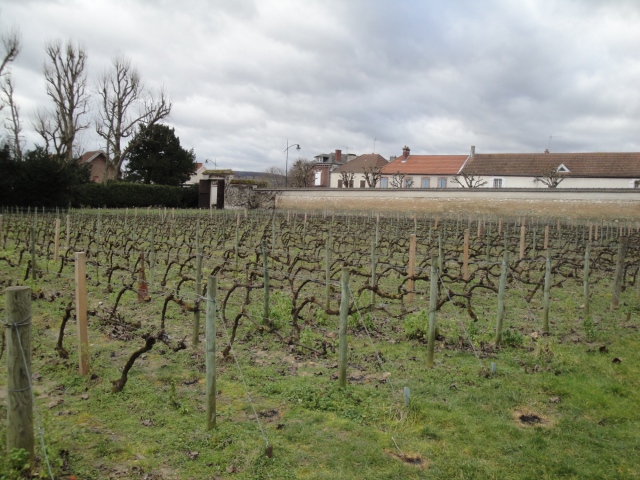 A wall-enclosed vineyard (clos) located directly at the Jacquesson buildings in Dizy. It is however not used for any of their vineyard-designated wines. Picture taken i February 2014.

Video from a car ride from the neighbouring village of Champillon to the eastern side of Dizy along the D251 road, that gives a good (but somewhat shaky) picture of the landscape and the vineyards. The quick pan to the right at 0:20-0:21 shows Hautvillers, at 0:25-0:30 the calvary is visible at the right-hand side of the road, and the communal border to Dizy is crossed at about 0:39. At the end of the video at 2:45 there are about 200 m of straight road left to the built-up area, and some Dizy houses are visible on the right-hand side of the road.

This entry was posted in Champagne villages and tagged Dizy. Bookmark the permalink.