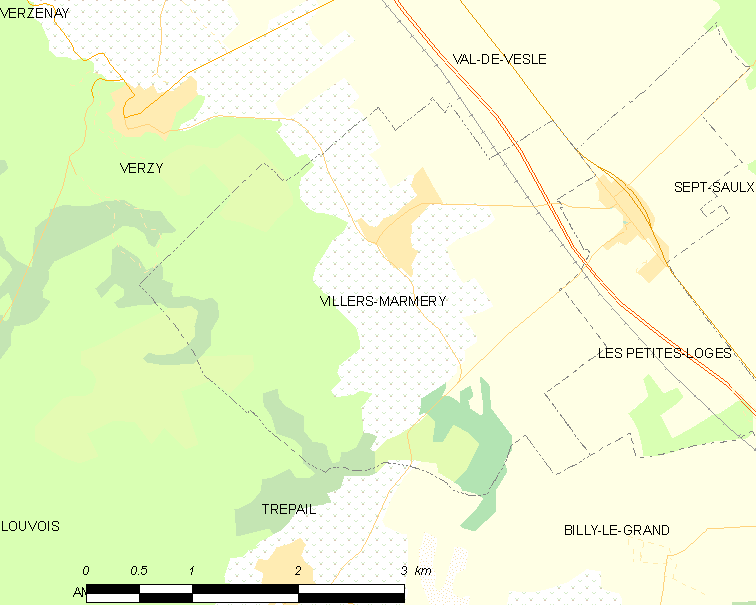 Villers-Marmery is located on the eastern side of the Montagne de Reims hill. The A4/E17 motorway runs through the eastern part of the commune.

The Villers-Marmery commune covers an area of 1073 hectares and counts 547 inhabitants (as of 2013) referred to as Villeriots and Villeriotes.

Commanderie du Chardonnay de Villers-Marmery, a society founded in 1997, is found in the village.

The vineyards consist of east-facing slopes on the Montagne de Reims. They are completely dominated by Chardonnay, in similarity to the two neighbours to the south, Trépail and Billy-le-Grand, but in difference to Verzy to the north, where Pinot Noir dominates.

The area with four Chardonnay-dominated villages (that also includes Vaudemange) on the eastern side of the Montagne de Reims is sometimes called the Perle blanche. This area thus differs from the rest of the Grande Montagne de Reims which is clearly dominated by Pinots: Pinot Noir in the south and northeast, and Pinot Meunier in the north. These four villages were elevated to premier cru status in 1985.

In Villers-Marmery we find chalk with some gravels mixed in, and the Champagnes (from Chardonnay) are described locally as firm, flowery, and mineral. In some vineyards there are silt or brown clay on top of the chalk, and there the wines tend to be more powerful or spicy in style.

The difference compared to Côte des Blancs Chardonnay has also described as those from the Villers-Marmery area being slightly more full-bodied, softer, and somewhat more fruity.

A short video clip from the 2011 harvest in one of Henriet-Bazin’s vineyards in Villers-Marmery:

A video showing activities at Coopérative Rurale Vinicole during the 2015 harvest (French audio without subtitles):

This entry was posted in Champagne villages and tagged Villers-Marmery. Bookmark the permalink.